Scot Gov: “It will help to tackle some of the biggest challenges Scotland faces now and in years to come, delivering economic, social and environmental returns.”

The Scottish National Investment Bank has officially opened for business with the completion of its first major investment.

It is the UK’s first mission-led development bank and it is being capitalised by the Scottish Government with £2 billion over ten years.

The bank’s proposed missions will focus on supporting Scotland’s transition to net zero, extending equality of opportunity through improving places, and harnessing innovation to enable Scotland to flourish.

It will provide patient capital – a form of long term investment – for businesses and projects in Scotland, and catalyse further private sector investment.

“The Scottish National Investment Bank will help to tackle some of the biggest challenges we face now and in the years to come, delivering economic, social and environmental returns.

“It is hitting the ground running with its first major investment in M Squared – a great example of the ambitious and innovative companies we have here in Scotland that will be key to our economic recovery and future prosperity.

“The launch of the bank is one of the most significant developments in the lifetime of this parliament, with the potential for it to transform, grow and decarbonise Scotland’s economy.”

“Today is a key milestone for the Scottish National Investment Bank. Our launch enables us to make mission-led, strategic, patient investments in businesses and projects that can deliver benefits for the people of Scotland. I am excited about the role the Bank will play in supporting and enabling growth in the Scottish economy. 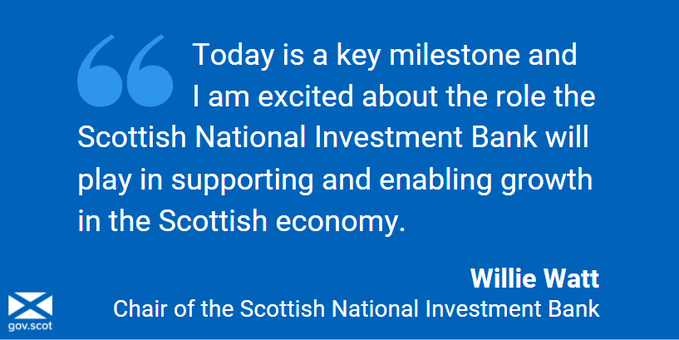 “We are particularly pleased that our first investment is in M Squared which is at the cutting edge of innovation and is a recognised world-leader in its field. It is our firm belief that the bank will make many more investments that deliver positive mission impacts in the years and decades to come.”

“Science and advanced technologies have a major role to play in Scotland’s future economic prosperity. By increasing investment in research and development with a mission-based approach, Scotland has a real opportunity to actively tackle climate change and benefit from the coming quantum revolution.

“We are delighted that the Scottish National Investment Bank has invested in M Squared as its very first business – our shared commitments to society and the environment makes this an ideal partnership that will enable accelerated growth and progress in frontier technologies.”

Benny Higgins, Strategic Adviser to the First Minister on the establishment of the bank, said:

“It has been a privilege to be part of an outstanding effort to make this a reality. We could not have predicted that the current pandemic renders the need for mission-led investment even more vital to create a robust, resilient wellbeing economy in Scotland.”