After pro-independence parties won a record result in the 2021 election, there is a clear mandate for an independence referendum.

Watch our video below setting out the facts.

As Scotland readies itself to choose its own future, media from across Europe and the world have their eyes on Scotland.

It’s increasingly clear that the world recognises Scotland’s clear mandate for a referendum – and we’ve pulled together a selection of international coverage here.

France’s biggest newspaper Le Monde has published this article – you can read it here, in French or in English. 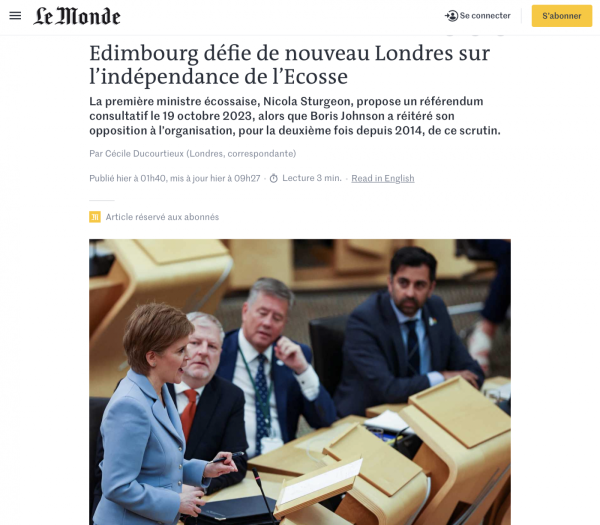 Austrian broadsheet newspaper Die Presse says “Boris Johnson’s Conservative British government tore Scotland out of the Commonwealth against its will and led the rest of Britain into a deep crisis”. Read the article here.

Italian public broadcaster RAI News also covered the announcement, and talked about how Scotland being dragged out of the EU justifies a fresh independence referendum. Read the article.

Australia’s public broadcaster ABC News has also reported on the referendum announcement and stressed “there is a majority for a new independence vote”. Read the article here.

One of the USA’s biggest and oldest newspapers, The Washington Post, reports that “much has changed in recent years, including Britain’s departure from the European Union. The majority of Scots voted to stay in the bloc.”
Read the article.

The Scottish Government have introduced new regulations via The Scottish Parliament on smoke and carbon monoxide alarms in all homes.

Legislation due to come into effect will mean that the standards which currently apply to private rented property and new-builds will also eventually be extended to all homes in Scotland. END_OF_DOCUMENT_TOKEN_TO_BE_REPLACED

In the early stages of the COVID-19 crisis, German President Frank-Walter Steinmeier said: “This pandemic is not a war. Nations are not against other nations, soldiers against other soldiers. It is a test of our humanity.”

These have been indeed the most testing of times for people in Europe and across the world. END_OF_DOCUMENT_TOKEN_TO_BE_REPLACED

Independence is the normal form of governance for most nations in the world. Most of them take it, and the ability it affords them to take decisions in their own national interest, for granted.

Being independent does not magically solve every problem a country faces, but it does allow the opportunity to deal with those problems in a way best suited to your needs. That is the essence of self-government – but Scotland does not yet have the ability to exercise those independent choices. END_OF_DOCUMENT_TOKEN_TO_BE_REPLACED

I knew that this was coming, but the timing seemed off. About an hour before the campaign livestream, news broke that Senator Bernie Sanders was suspending his bid for the Democrat nomination. As I listened to the broadcast – tuning out from time-to-time as Bernie went through his greatest hits – something grabbed my attention. If you were to guess who he would quote, who would it be? If you are like me and thought it would be Dr Martin Luther King, Jr., give yourself a half-point because he quoted two individuals. The senator from Vermont reserved his initial quote for Nelson Mandela, and the words hit me like a punch in the gut, “It always seems impossible until it is done.” END_OF_DOCUMENT_TOKEN_TO_BE_REPLACED

April the 6th 2020 marks the 700th Anniversary of The Declaration of Arbroath and the claim of right of an Independent and sovereign Scotland.