The Scottish Government has said it is impossible to recommend the Scottish Parliament gives consent to the UK Government’s Internal Market bill. (8 Sept 2020)

The bill, which will be published by the UK Government tomorrow, engages the Sewel Convention, and therefore the UK’s constitutional rules require the consent of Holyrood. 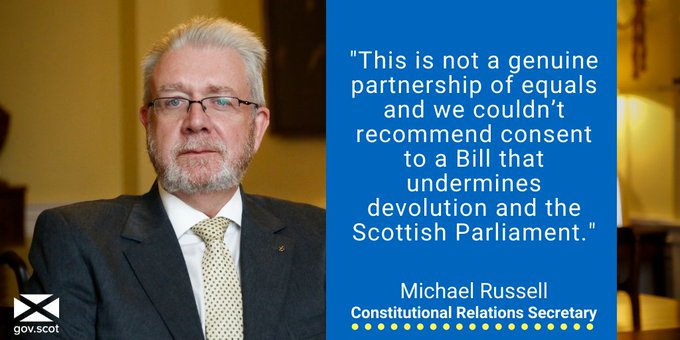 Constitution Secretary Michael Russell said if the UK Government refuses to respect the will of the Scottish Parliament it will demonstrate once more that the UK’s constitution provides no protection to the devolution settlement and the UK Government can ignore the rules whenever it chooses.

Mr Russell said there is no mechanism to challenge such disregard for accepted practice, demonstrating the UK is “not a genuine partnership of equals”.

“This is a shabby blueprint that will open the door to bad trade deals and unleashes an assault on devolution the like we have not experienced since the Scottish Parliament was established. We cannot, and will not, allow that to happen.

“It will open the door to a race to the bottom on food standards, environmental standards and will endanger key public health policies such as minimum unit pricing. It will also deliver a hammer blow to the Scottish economy by making it harder for the UK Government to conclude Free Trade agreements if other countries think the UK won’t meet its obligations.

The @scotgov has said it is impossible to recommend the Scottish Parliament gives consent to the UK Government’s Internal Market Bill. More here: 👉https://t.co/PtSIfsJfUS pic.twitter.com/p0ScaVtYBV